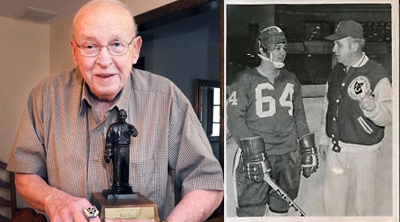 Crocker passed away in December at the age of 90.

Known as the “Dean of New England Scouts,” Crocker had been a staple in the hockey community since the 1960’s when he started as an assistant coach and recruiter for his alma mater, Boston University. Following his stint at BU, Crocker moved on to become head coach at the University of Pennsylvania in 1973, where he spent four seasons guiding the Quakers. After a brief stay coaching at Colby College, Crocker then graduated from the college ranks in 1980 as he moved to the front office when hired as the assistant general manager for the Hartford Whalers.

Crocker began his years as an NHL scout in 1993 with the New York Rangers where he remained until 2005 before joining the Los Angeles Kings organization.

In total, Crocker play a hand in building teams that won back-to-back NCAA national championships (with Boston University in 1971 and 1972), an American Hockey League Calder Cup championship (with the Hartford Wolfpack) and three Stanley Cup championships (in 1994 with the Rangers, and 2012 and 2014 with the Kings). He was elected into the Massachusetts Hockey Hall-of-Fame in 2006.

It was a career in hockey that spanned beyond six and a half decades as Crocker became one of the most respected scouts in the industry. A career full of accomplishments that culminated when Crocker was awarded the NHL’s Lester Patrick Award in 2015, given in recognition for contributions to the game of ice hockey in the United States.